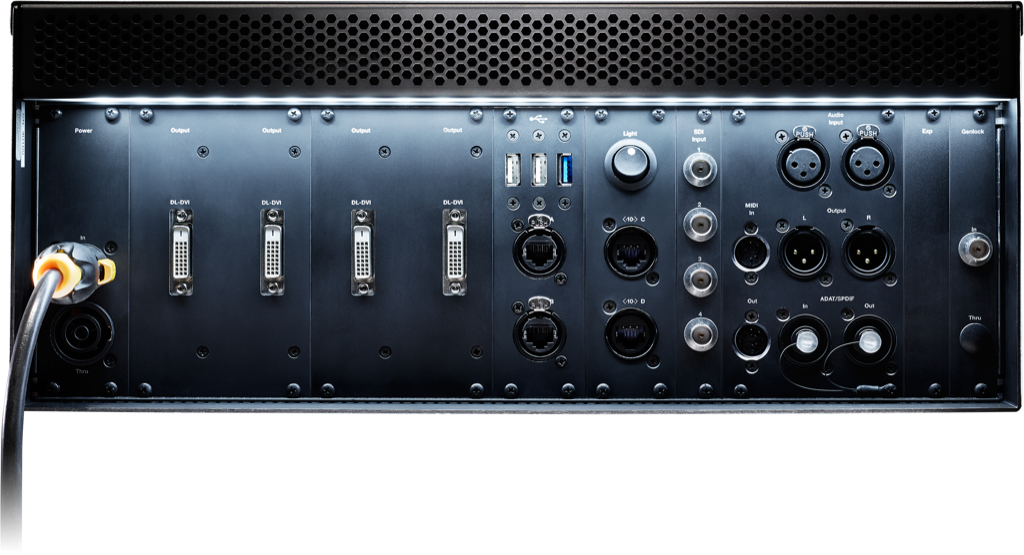 With the d3 4×4pro, big shows are easy. The d3 4×4pro packs enough power to Push Every Pixel™ over four 4K outputs, or sixteen HD outputs. This means one d3 4×4pro can replace four conventional media servers with four outputs each.

 The d3 4×4pro can play up to 32 HD layers of DXV/HAP content, and split this up however you like, with canvas sizes up to 16K pixels across.

Why wait for large video files to be split and distributed? The d3 4×4pro eats them for breakfast.

The d3 4×4pro now supports the high-fidelity HAP-Q codec. Better still, it can play up to eight HD layers of lossless Quicktime Animation.

So now you can respond to the most demanding of clients without breaking a sweat.

Whether you’re in a theatre, arena, or a stadium, the 4×4pro has the action covered.

As we transition from HD signal flows to 4K, it’s far from clear which signal standards will dominate. So the d3 4×4pro meets this challenge with an industry first: replaceable Video Format Conversion (VFC) cards.

d3’s VFC cards enable users to drive up to 16HD outputs as DVI or SDI (1080p) or 4×4K DP1.2 from a single d3 4×4pro system. Signals can also be mixed on one system if required. Large multi-projector shows can be delivered with fewer machines, no downstream splitters, and practically no signal latency.

VFC output cards are an industry first: no other media server on the market offers the ability to gracefully transition from HD to 4K as 4K proliferates.

The d3 4×4pro ships standard with 4x DisplayPort 1.2, and Quad-DVI and Quad-SDI cards are available as accessories to the system. The d3 4×4pro comes with an extra, separate output for your control screen (GUI) so all VFC outputs are for your stage.

The d3 4×4pro’s external PCIe slot allows you to install our coming range of hardware accessories. Whether it’s more SSD storage, more channels of video capture, or generative content rendering, the d3 4×4pro will go there with you.

The d3 4×4pro is much more than just a computer – it’s a rugged media server.Its aluminium and steel chassis is internally braced for incredible rigidity and robustness, but it’s still light enough for one person to lift.

The minimal front face has an OLED display so you can easily identify the machine and its status. The front also features and twin USB3.0 ports for plugging in content drives.

Opening the front gives you access to the fan filters and the military-grade RAID0 SSD enclosures (up to 8TB).

The rear panel sports next-generation lockable Neutrik True1 power. If you lose the cable, you’ll still be able to access the IEC.

All connectors – from ethernet to video to genlock to pro-audio – are lockable, robust, and easily replaceable. We’ve even added an LED worklight so you don’t have to fumble around in the dark.

Push Every Pixel™ is our benchmark for the playback power needed by video professionals everywhere.

Push Every Pixel™ means that a machine has enough power to fill every physical pixel of its outputs with at least two simultaneous layers of content.

With powerful Xeon processors, workstation-grade GPUs, terabytes of RAID-0 SSD storage, and lightning fast 10Gbits/sec ethernet, the d3 4×4pro is designed from the ground up to meet this challenge.
Specifications